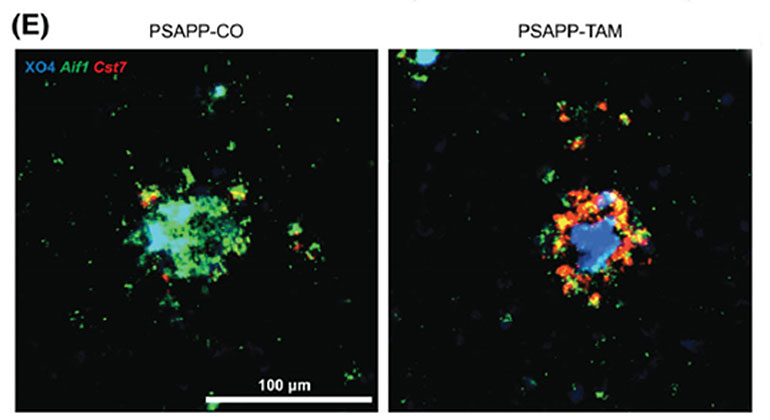 A new study links a gene called inositol polyphosphate-5-phosphatase D (INPP5D) which is concentrated in the brain’s cleanup cells known as microglia, to the inflammation that has increasingly emerged as a key mechanism contributing to Alzheimer’s disease. The findings may offer a new potential target for therapies for the intractable condition. Microglia are immune cells in the brain that act as scavengers to remove dying cells and amyloid plaques that are associated with the dementia of Alzheimer’s disease. Human genetics studies initially linked INPP5D to the risk for Alzheimer’s disease. Other studies revealed elevated levels of INPP5D in the postmortem brain tissue of Alzheimer’s disease patients, but the specific role(s) that the gene plays in both early or late disease and the mechanism contributing to these altered functions remains unknown. Because INPP5D in the brain is concentrated in microglia, the research team used mice genetically engineered to “knock down” (turn off) the mouse INPP5D gene in their microglia at the onset of pathology. This process allowed them to better see the specific impact of the missing gene on brain tissue. They then measured plaque buildup and microglial behavior approximately three months later. Since INPP5D was known to be elevated in the brains of Alzheimer’s patients, they expected that the mice with that gene inactivated would be protected from the amyloid plaques that are hallmarks of Alzheimer’s disease pathology. They found the opposite to be true: mice with INPP5D removed from their microglia actually had more plaques than those with normal microglia.