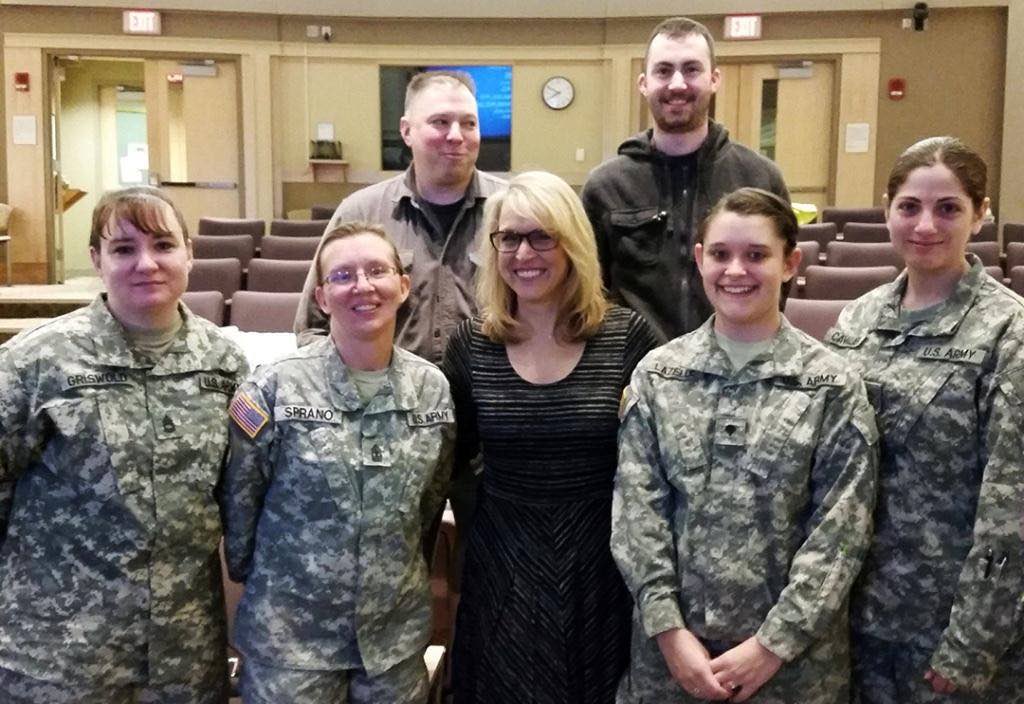 Dr. Yehuda in Burlington, Vermont, where she was giving a talk about molecular markers of suicide risk in returning veterans.

In January, Rachel Yehuda, MS, PhD, was in Israel learning how to use MDMA-assisted psychotherapy to treat PTSD. MDMA, sometimes known as ecstasy, is poised to become a powerful treatment option for PTSD. In 2017, the U.S. Food and Drug Administration designated it as a breakthrough therapy when coupled with psychotherapy sessions that last up to eight hours. The results of preliminary clinical studies are promising, and the drug could be approved by the FDA by 2021.

To prepare the caregivers who will be administering it, the Multidisciplinary Association for Psychedelic Studies has been holding MDMA therapy training programs, such as the one Dr. Yehuda attended in Israel. As part of the training, the therapists themselves undergo MDMA-assisted psychotherapy. Dr. Yehuda’s goal is for the James J. Peters VA Medical Center in the Bronx (which is affiliated with Mount Sinai), where she is the Mental Health Patient Care Center Director, to be the first VA medical center to offer this treatment to veterans. She is also planning to investigate the mechanisms of this treatment by evaluating genomic and molecular biomarkers before and after treatment, as she has been doing with other pharmacological and psychotherapy treatments for PTSD.

“MDMA produces a substantial change in mental state that increases people’s ability to engage with traumatic material in psychotherapy,” she said. “This is important because it is easy for trauma survivors to avoid their feelings of shame, vulnerability, fear, and guilt. Because this treatment seems to work so well, studying dysregulated molecules and pathways before and after MDMA therapy may help us understand more about how resilience is achieved from a neurochemical perspective.”

This is only the latest example of Dr. Yehuda being on the cutting edge of trauma treatment. She has spent her career far ahead of the curve in PTSD, anticipating the use of biological markers for diagnosis, prognosis, and treatment-matching. Her work has also been at the forefront of identifying molecular processes involved in PTSD risk, susceptibility, resilience, and recovery.

Dr. Yehuda started her career as a postdoctoral fellow in biological psychology at Yale Medical School in 1987. Her dissertation focused on how stress hormones regulated important developmental brain processes in animal models, but she was curious about the applicability in humans. Her postdoctoral work produced some of the initial findings on the endocrinology and neurochemistry of PTSD, and as a new assistant professor at Mount Sinai in 1991, she led a group that was among the first to look at specific biological differences in people who have survived trauma and have PTSD.

Dr. Yehuda and her colleagues observed that Vietnam War combat veterans with PTSD had significantly lower levels of cortisol, a steroid hormone that helps regulate physiological responses to stress, compared to people without PTSD. This finding was provocative because elevated cortisol levels are associated with stress, and it seemed counterintuitive for cortisol levels to be decreased in those suffering from PTSD. This discovery was the first step towards understanding that PTSD involves a failure to recover from normal processes involved in responding to stress, and helped identify targets for prevention and treatment.

Towards the end of her postdoctoral fellowship, Dr. Yehuda became interested in whether the observations made about combat Vietnam veterans could be applied more generally to other groups of trauma survivors, so she decided to initiate biological studies in Holocaust survivors. Dr. Yehuda had known many Holocaust survivors growing up in the Jewish community in Cleveland. At first glance, they did not seem to have similar psychological or behavioral issues to combat veterans from the Vietnam War.

As a pilot study, Dr. Yehuda brought a research group to Cleveland and set up a lab in her parents’ basement. The team interviewed approximately 100 Holocaust survivors and obtained urine and blood samples to determine stress hormone levels. They were surprised to learn that about half of those interviewed had PTSD, and also demonstrated lower cortisol levels—similar to what had been observed with the Vietnam veterans. An important difference, however, was that Holocaust survivors typically weren’t treatment-seeking, and they didn’t have a dedicated institution like the VA. To rectify this, Dr. Yehuda started a Holocaust treatment clinic at The Mount Sinai Hospital in 1992 to treat survivors and their offspring.

A key to prevention

The cortisol findings shaped the trajectory of the rest of Dr. Yehuda’s career. Her work over the years shows that in people with PTSD, cortisol levels don’t increase the way they should to counteract adrenaline and calm the body, which is what leads to resilience and recovery.

Finding a way to increase cortisol could be a method to prevent PTSD, and Dr. Yehuda has been investigating options. The Icahn School of Medicine at Mount Sinai has one of the largest programs in the country for the study of PTSD biomarkers, and funding to further her research has brought in approximately $12 million over the last decade. She anticipates an award notice for an almost $6 million grant from the Department of Defense in April for a study that provides trauma patients in hospital emergency rooms with an injection of synthetic cortisol, to mimic the body’s calming system and prevent PTSD. If it works, the potential for soldiers to self-administer on the battlefield would be game-changing.

She’s also working with combat veterans in collaboration with the New York Stem Cell Foundation to examine molecular aspects of PTSD. The study involves converting fibroblasts from skin into induced pluripotent stem cells, then reprogramming them into neurons and stimulating the neurons with stress hormones to see whether response to stress hormones is genetically predetermined.

In 2016, Dr. Yehuda published results of a study showing that Holocaust survivors and their adult offspring had epigenetic changes on the same region of a stress-related gene. Epigenetics has been described as the software that directs the body’s hardware (genes)—changes caused by modified gene expressions as opposed to changing the genes themselves.

This finding was the latest discovery in what had been a 25-year examination of the effects of the Holocaust on their offspring. The research began when adult children of Holocaust survivors called the Mount Sinai Specialized Treatment Program for Holocaust Survivors asking to be treated. A series of studies demonstrated that Holocaust offspring had several psychological and endocrine findings in association with maternal and paternal Holocaust exposure and PTSD.

In this latest study, Dr. Yehuda reported altered methylation on a gene known as FKBP5 in both Holocaust survivors and their own children: this constituted the first demonstration of a link between parental trauma and offspring effects. The finding was a natural extension of prior work examining effects on offspring in women who were pregnant while exposed to the 9/11 attacks. As she said on the On Being podcast, “We learned that there was a trimester effect on cortisol levels in the babies. That was really huge for us, because we began to understand that some of the differences between maternal and paternal trauma and risk might have to do with in-utero contributions to changing the stress system.”

Veterans’ therapy: Thinking outside the box

Last year, Dr. Yehuda got a veterans film-making workshop series off the ground in collaboration with the Patton Veterans Project at the James J. Peters VA Medical Center in the Bronx. The workshops serve as a therapeutic tool to empower veterans to contemplate their experiences and work collaboratively to create short films about their time serving and/or reintegration upon returning.

“I’m fascinated with film-making and applying it to veterans because I think storytelling can be essential for healing,” she said. “In fact, the existing therapies for PTSD really are rooted in the idea of telling one’s story. When you make a film, you’re telling the story from the perspective of how the viewer will receive it. And this kind of rotating from different angles and thinking of trauma in a different way is an important part of the therapeutic process. The trauma itself is no longer the end of the story—the story moves, and you move with it. Writing can do this, acting in a play, music—the so-called right-brain type of expressions.”

These examples are just a selection of Dr. Yehuda’s groundbreaking research on trauma—why it happens, how we can prevent it, and how we can treat it. “What all the studies point to is that life events have transformative powers on our biology and behavior,” she said. “By understanding how experience changes us, we can harness that knowledge towards achieving resilience.”