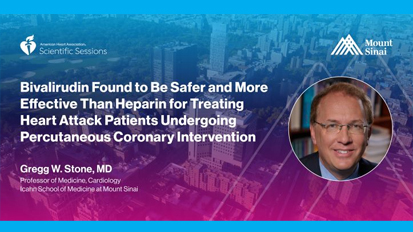 Mount Sinai study could change the treatment course for hundreds of thousands of patients, saving lives and preventing complications

Bivalirudin is a safer and more effective anticoagulant than heparin for treating patients with the most serious type of heart attacks who undergo urgent percutaneous coronary intervention (PCI), and can lower the risk of death or major bleeding by 31 percent.

These are findings from a new study led by researchers from the Icahn School of Medicine at Mount Sinai. This is the first large-scale clinical trial to compare the two anticoagulants most widely used after PCI, and shows bivalirudin given with a two- to four-hour high-dose infusion significantly reduces death, major bleeding, and thrombosis when compared with heparin.

The results were announced Sunday, November 6, in a Late Breaking Clinical Trial presentation at the American Heart Association’s Scientific Sessions (AHA 22) in Chicago, and published in The Lancet. This work could have broad implications, changing the treatment course for hundreds of thousands of patients across the world who experience a major blockage of a heart artery, a condition known as ST-segment elevation myocardial infarction or STEMI. It is the most serious kind of heart attack.

“For the first time, this study identifies the best and safest treatment course for patients undergoing stenting to treat a STEMI heart attack,” says co-Principal Investigator Gregg W. Stone, MD, Director of Academic Affairs for the Mount Sinai Health System and Professor of Medicine (Cardiology), and Population Health Science and Policy, at Icahn Mount Sinai. “Compared with heparin, bivalirudin plus a short infusion substantially improved the likelihood of surviving a STEMI and reduced the two most feared complications—major bleeding and stent thrombosis.”